Nat Christian studied filmmaking in college.  He was asked by classmates to act in their student projects.  He then studied with some of the top acting coaches in the industry and was soon cast in local plays, receiving critical acclaim and awards, and landed running roles on TV including “General Hospital”, “The Young and the Restless”, “Days of Our Lives.”

He continued to write and actor, Jerry Orbach (Law and Order), read one of Nat’s screenplays,”California Casanova”, and offered to play the lead role in it, which brought about the independent financing.  Nat also directed the movie.  He was then asked to direct the production company’s other feature, a zany comedy, “Club Fed”.

Nat wrote, directed and produced “Monday Morning” a socio-political drama set within the context of a Minnesota political campaign and the harsh realities of Los Angeles’s homeless community.  Monday Morning received a theatrical release at Laemmle Theaters.  Because of its very graphic depictions and general philosophy of the homeless situation, Monday Morning (not rated) caused a polarizing effect, off-putting with some viewers, while highly praised by others for the very same elements. Monday Morning won the “Best Feature Film Award at the Long Island Film Festival, as well as being in the Official selection at others.

Along with his seventeen screenplays, Nat also story consulted on “The Duke” (Buena Vista). Nat wrote the feature “700 Hill” for Monterrey Pictures, which is in development.

CLIPS from a WORKSHOP PRODUCTION 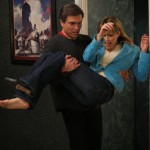 CLICK TO VIEW Nat Christian in some scenes from “CHANNELS“

“The Young and the Restless”  (Lead/Recurring)  –  CBS

Clips from early his early days on TV

CLICK TO VIEW Nat Christian in a couple of scenes from L.A.T.E.R.