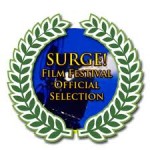 “A unique story that dives beyond its political exterior, unveiling a severe problem
in our country and putting a spotlight on those who must rise up and make a difference”
… Stephen Davis, College Movie Review